Moral Voices is a student-led initiative run through Brown RISD Hillel which focuses on a different issue of universal moral importance each year. Our 2015-16 theme is violence against LGBTQ+ individuals and communities. We will focus primarily on violence on a national level, partnering with groups both on campus and in the larger Providence area to foster relationships and implement changes that will extend far beyond just this year. E-mail Moral Voices Co-Chairs, Natalie Cutler and Rachel Levy, at moralvoices@brownrisdhillel.org. 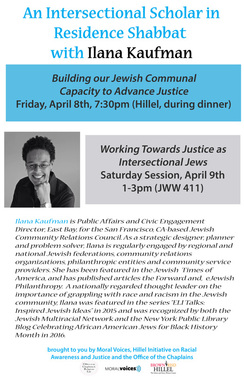 An Intersectional Scholar in Residence Shabbat with Ilana Kaufman
Friday, April 8th, 7:30pm at Hillel
Please join us for a powerful and engaging Shabbat featuring scholar-in-residence Ilana Kaufman, who will speak during dinner about building our Jewish communal capacity to advance justice.

Ilana Kaufman is Public Affairs and Civic Engagement Director, East Bay, for the San Francisco, CA-based Jewish Community Relations Council. As a strategic designer, planner and problem solver, Ilana is regularly engaged by regional and national Jewish federations, community relations organizations, philanthropic entities and community service providers. She has been featured in the Jewish Times of America, and has published articles the Forward and, eJewish Philanthropy. A nationally regarded thought leader on the importance of grappling with race and racism in the Jewish community, Ilana was featured in the series “ELI Talks: Inspired Jewish Ideas” in 2015 and was recognized by both the Jewish Multiracial Network and the New York Public Library Blog Celebrating African American Jews for Black History Month in 2016.
If you require any special assistance, such as an ASL interpreter, please let us know.

Register: https://mvjanetmock.eventbrite.com Tickets are free and open to the public.

About Janet Mock
Janet Mock is a writer, cultural commentator, advocate for trans women’s rights and the New York Times bestselling author of Redefining Realness: My Path to Womanhood, Identity, Love & So Much More. Feminist cultural critic bell hooks called Janet’s memoir, "A lifemap for transformation," while Melissa Harris-Perry said "Janet does what only great writers of autobiography accomplish—she tells a story of the self, which turns out to be a reflection of all humanity." A board member at the Arcus Foundation, Janet has been called one of the smartest women on Twitter by Fast Company and her work has been recognized by the Sylvia Rivera Law Project, the Anti-Violence Project, and Planned Parenthood. Hailing from Honolulu, Hawaii, Janet lives and writes in New York City, and has been fan-girling over Beyonce for 16 years.
"AIDS, Sexuality and American Religion" - A Conversation with Dr. Anthony Petro
February 25th: 7:30pm (Petterutti Lounge)
“Is AIDS a judgment from God?” – the Reverend Billy Graham, often lauded as “America’s Pastor” owing to his popularity in late 20th century, asked this question to a crowd in Columbus, Ohio. “I could not say for sure,” he answered, “but I think so.” This talk looks at the role of religious figures in the early history of the AIDS crisis in the United States. While some leaders of the Christian Right pronounced AIDS as God’s punishment for homosexuals and for the nation that harbored them, others called for care and compassion or even joined the front lines of AIDS relief work and activism. Major Christian leaders and organizations offered new moral visions – both Protestant and Catholic, progressive and conservative – for AIDS education, as they brought Christian discussions of sexual morality, including homosexuality, into the national spotlight. AIDS sparked the creation of this moral rhetoric and quickened efforts to advance a larger moral agenda regarding the health benefits of abstinence and monogamy, a legacy glimpsed as much in the traction gained by abstinence education campaigns as in the more recent cultural purchase of gay marriage.
Past years:
Moral Voices 2014-2015: Gun Violence
Moral Voices 2013-2014: Genocide
Moral Voices 2012-2013: Wrongful Convictions
​